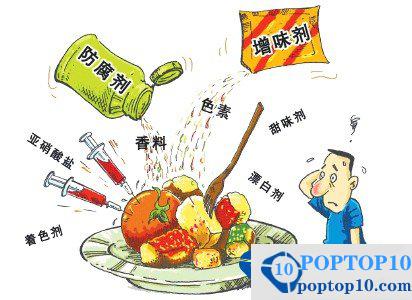 A survey report on the intake of food additives for children in 9 cities in China, published by the non-profit organization “iearth-Love Earth”, states that 1/10 children consume more than 3 snacks per day, and 6% of children drink beverages every day. More than 3 bottles (excluding mineral water and homemade tea). In the summer, children who eat ice cream every day are up to 26%. The survey also sampled the ingredients of the 489 food categories and the food additives contained in 33 categories. Among them, instant noodles, milk drinks, potato chips, ice cream, biscuits and other foods contain the most additives. The list 123 (www.phb123.com) shares the most popular snack list for you, and hopes that parents will urge their children to eat less of these snacks.

Additives to the most snack list, these snacks are best not to eat

A pack of instant noodles can have up to 25 food additives, such as sodium glutamate, caramel, citric acid, and tert-butyl hydroquinone. Long-term consumption of products containing citric acid in children may lead to hypocalcemia.

The additives contained include sodium nitrite, potassium sorbate and the like. Among them, sodium nitrite may produce carcinogenic nitrosamines in the body.

Additives such as potassium sorbate, citric acid and carrageenan are most commonly used. Excessive intake of potassium sorbate can cause allergic reactions and affect your child’s absorption of calcium.

Additives such as artificial flavors, thickeners, and synthetic pigments are most commonly used. Among them, some artificial pigments cannot be used for food in foreign countries.

The additives contained include potassium sorbate, sodium hexametaphosphate, and the like. Excessive amounts of the latter can cause disorders of calcium metabolism.

May contain additives such as aspartame, sorbitol, and citric acid. Excessive sorbitol can cause diarrhea.

Possible additives include sodium glutamate and the like. Both of the above are prohibited for use in infant foods.

In addition, the survey also found that a lot of sweeteners such as aspartame or acesulfame were used in foods that children often consume. These two additives have also been reported to be associated with a variety of adverse reactions. Experts remind that parents of children with allergies, asthma, and ADHD should pay special attention to foods that children often eat, because some food additives may aggravate these symptoms.

Associate Professor Du Songming from the Center for Nutrition and Food Safety of the Chinese Center for Disease Control and Prevention said that not all snacks are bad for children. Eating snacks may be divided into grades. such as: